The result don’t differ much from last year. When I did this I wondered how the defensive points that the defenders now got would affect the lists.

The most significant change is that the WW-holders not holds the top positions as defender any more and that it made it harder to qualify by def points.

I search back, I haven’t saved the points needed for off or def but I have a feeling that def points is much higher now.

I saved the points this year ^^

Last year Final topped on 12000 players and stabilized on 10000. 8000 fulfilled the server. Probably the same this year.

When will Final start? is the most usual question now. The Tournament pages says 2 weeks after last server finished. 3-4 weeks have been normal. End of October – start of November is a decent guess.

In the table below you have the points needed for pop, off and def in the upper row on each server.

Turkey has been outstanding when it comes to numbers the whole qualification. Not an easy server for qualifying =) 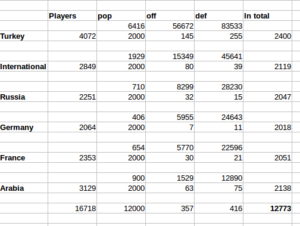