At first it looks like it is several bigger alliances here and no real metas but when I begin to check the profiles a lot of connection between alliances show up. Primary it is two head alliances in every quad with a lot of smaller wings and that maybe is the explanation why the big metas is missing. The biggest allys, The Clan and Uruk-Hai is from Italy.

The Italians was prevented from participating in the last Final because of some stupid new law in Italy which don’t allow the players to win prices without paying taxes so they could not get their tickets to the Final. Now they have gathered on the chile server and I hope they have remember to use a non-italian email so enough of them can get their tickets this time.

It is hard to try to guess which ally that have an advantage. The italians have no WW. SW quad have two. One for Unidos and one for Partimos. Ronin in SE have one WW.

The grey zone is equal settled and mostly no clusters along the border.

The forum had a tread where they discuss the server and it is a fair activity on that. I found a very fun declaration of War in another tread: http://forum.travian.cl/showthread.php?t=49022

This server have been the most difficult one to keep my observation account alive. Some stupid player visit me with catas every time I got a few pop. With some help from a Italian player, biohazard who  Imet on the 10x 2012, I at last managed to build enough on my village. What was most irritating about the catas guy was that he never ever tried to farm me. 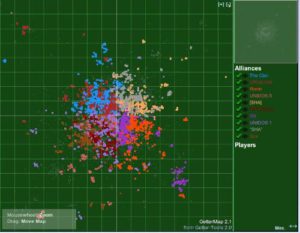 On the chile server I met an old acquaintance from 10x.com July 2012. That speed was so fun! It ended in only 34 days. When mic gave me the rights in the ally I kicked nearly half of the players because they were low active and farms. It’s amazing he still give me kisses ^^

Here I have interviewed his dual Mathias.

1. Your ally is one of greatest on this qualification server. From which country are your members? Have you played the tournament before, alone or as a ally?? Have you preplanned this server?

We are all from Italy, and we played the qualification server in the 2k11. We planned to play this Chile server to get an easy qualification to the world tournament.
—————–

2. What is your opinion about the status on the server?

3.What are your allys goal for this server? Do you have any opponents? Have you met any skilled players or alliances that you respect for the way they are playing?

The only goal for our ally in this server is to qualify the most of the players. There is some opponents, but none is serious. If we play as we know we could defeat them easily I suppose.
—————————
4.

The russians was superior in the last Final. To defeat them you need to cooperate in a bigger group. Which of your opponents here would you like to see as a partner in the Final, or do you know about some from another domain?

5. Tell us something about yourself and your account? Male or female? How old are you? Where are you from? What do you do for your living? How long have you played this game? What do you do when not playing Travian?

Male, 31. From Italy. I play alone in QuiQuoQua in “relax” servers or I dual in BIOHAZARD for harder servers. Now is three years that I play travian, but still have a lot to learn.
————————-

6. Anyting else you want to say?

May I offer you a good Franciacorta? 😀