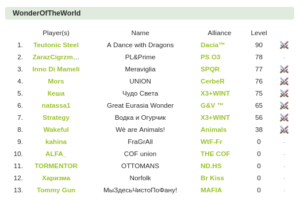 It feels a bit weird to read the same reports again after the rollback..

Let’s go directly to something more fun, the interviews!

To the rivals – prepare your asses, next year we will kick them hard.

1. This Final didn’t turn out as expected for you. You was favorites before start and now you can’t build on your WW. What happened and your opinion about that?

70% of ND meta leave the server after just 2 weeks

from beginning so its normal if we don’t build WW

SPQR was not enemies there were a NP between us

Yes Dacia deserve that but they need to know ( one hand cannot clapping) after they know that they will be more better.

They are good and organized also they have good leaders.

I want to tell them GG see you next time